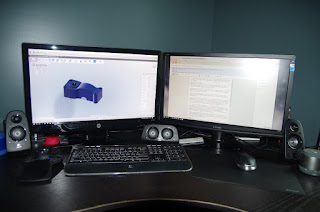 SpaceMouse Pro Wireless:
This device ships with a cable that you can plug into a USB port on your computer, the other end has two USB fittings, one where you can use the included dongle for the wireless functions, and a shorter USB cable for charging.

3DConnexion claims the device can work for up to two months on a wireless charge (40 hours a week), but I've never run it that long on battery to test it. However, it seems to work for a week without any problems.

Many CAD/CAM products include support for this product, the ones I have used are Autodesk Fusion 360, Autodesk Inventor, and Google Earth. The latter of which is pretty fun with this device.

Besides the puck for dynamic visual motion, the SpaceMouse Pro includes many buttons. On the left side are Esc, Ctrl, Shift and Alt, so that you don't have to move you hand back to the keyboard to press one of those. On the right are buttons labeled "T", "F", "R", fit plus two more. These buttons by default do Top, Front and Right views, fit the screen, the other two will toggle lock and unlock rotations and the last will roll the view.

Four larger buttons adorn the top of the unit. All of the buttons of this unit are programmable, and I programmed the top four to perform the two main isometric views, delete and undo. You can also program the speed your parts rotate based on the amount of input on the puck. When programming the buttons, it's best to bring up the programming menu from within your software product. Buttons can be programmed differently based on what application is currently on top. 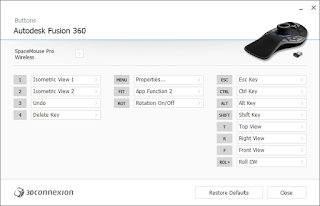 Working with and getting accustomed to using the SpaceMouse Pro is simple. After a week, you'd never want to go back to not having it in your CAD package if you do any 3D design. I can work on my model with the mouse, and rotate the part as needed, moving the hand to the keyboard fewer times.

CADMouse:
This device took a little longer for me to get used to. It's a little larger than most Logitech mice I use, and I was hitting the middle mouse button when I thought I was pressing the right mouse button. Also, this mouse is not cordless, causing you to revert to old habits to keep the cord from getting in the way.

That's right, this mouse is a three button that also has a scroll wheel, one additional button behind the wheel, and two buttons by the thumb rest. I use those to go forward and back in web pages. Since it is a three button mouse, you can program a function for the wheel button press separate from the middle mouse button. In my case I usually have it set to fit the drawing, especially if the scroll wheel is still being used as a zoom.

One thing I noticed right away with the CADMouse was how smooth it seemed to work. They claim 8200dpi and I can believe it, especially when paired with the mouse pad made for it. 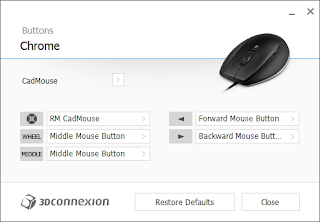 Conclusion:
These products from 3dConnexion make your job easier. Sure you can get everything done without them, but if you do a lot of CAD or CAM, they make your work easier. You do become accustomed to the devices quickly, and would be hard pressed to give them up once used to them. We give them a thumbs up here at the zen lab.